Space Between the Skies 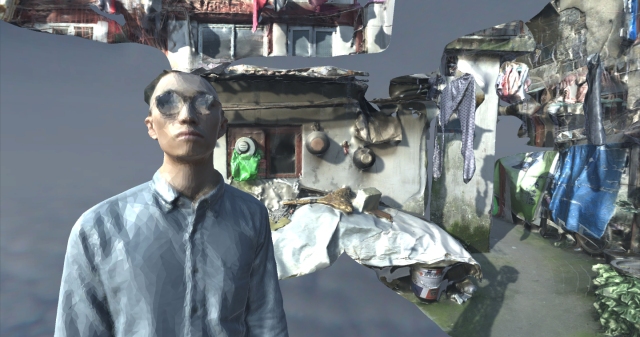 Space Between the Skies, a virtual reality experience, replaces the physical space of apexart with multiple virtual landscapes, either created from imagery collected at real world sites or from 3D constructed spaces. Hacked architectural and video game imagery, algorithmic collages, documentary footage of Wuhan, China, and dynamically enhanced audio/visual 360-degree responsive forest environments serve to transport the viewer beyond the limits of the physical gallery space.

By allowing viewers to occupy several environments simultaneously, these works experiment with cultivating multiple landscapes within the same physical space. Generated with 3D scanning technologies such as LIDAR/Photogrammetry, 3D modeling, and 360° recordings, these transposed landscapes question the supposed dichotomy between the real and the virtual. 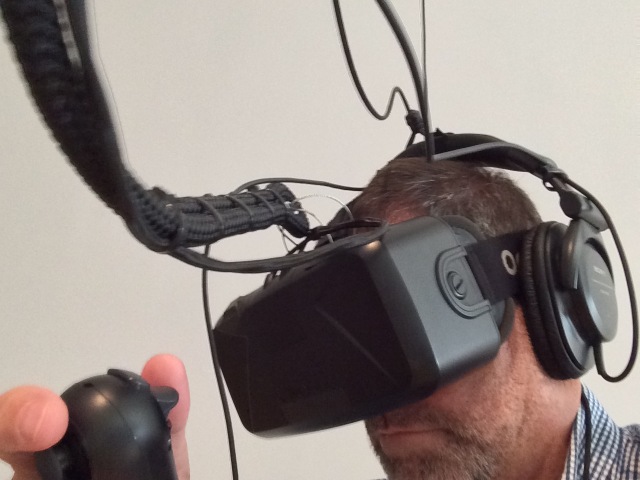 Seeing with the Body at a Virtual-Reality Art Show, by Lenore Metrick-Chen, Hyperallergic, May 11, 2016.

John Craig Freeman is a public artist with over twenty years of experience using emergent technologies to produce large-scale public work at sites where the forces of globalization are impacting the lives of individuals in local communities. His work seeks to expand the notion of public by exploring how digital networked technology is transforming our sense of place. Freeman is a founding member of the international artists collective Manifest.AR and he has produced work and exhibited around the world including at the Los Angeles County Museum of Art, the San Francisco Museum of Modern Art, FACT Liverpool, Kunsthallen Nikolaj Copenhagen, Triennale di Milano, the Institute of Contemporary Art Boston, and the Museum of Contemporary Art Beijing, He has had work commissioned by the ZERO1, Rhizome.org and Turbulence.org. His work has been reviewed in The New York Times, El Pais, Liberation, Wired News, Artforum, Ten-8, Z Magazine, Afterimage, Photo Metro, New Art Examiner, Time, Harper's and Der Spiegel. Christiane Paul cites Freeman's work in her book Digital Art, as does Lucy Lippard in the Lure of the Local, and Margot Lovejoy in Digital Currents: Art in the Electronic Age. His writing has been published in Rhizomes, Leonardo, the Journal of Visual Culture, and Exposure. Freeman received a Bachelor of Art degree from the University of California, San Diego in 1986 and a Master of Fine Arts degree from the University of Colorado, Boulder in 1990. He is currently a Professor of New Media at Emerson College in Boston. Freeman writes, “If Andy Warhol set out to create a distinctly American art form in the twentieth century, I identify with those who seek to create a distinctly global art form in the twenty-first.”
View all posts by John Craig Freeman →
This entry was posted in Exhibitions, Virtual Reality. Bookmark the permalink.