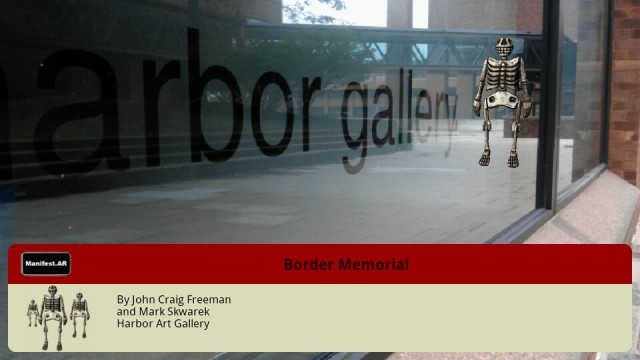 WHAT
The Harbor Gallery proudly presents a landmark exhibition of international contemporary new media artists converging on the theme of “place” in its October exhibit, Mediating Place, curated by Meredith Hoy and Kevin Benisvy. The artists hail from New York City; Berkely, Califonia; London, UK; China (exact wherabouts unkown); and our very own Boston, MA. They represent institutions as diverse as Colgate University, University of California Berkeley, University of London, Emerson College, Mass Art, Wellesley College, and MIT, and have work in the collections of The Whitney Museum of American Art, The San Francisco Museum of Modern Art, among others. The show seeks to address issues of place in the environment, politics, the home, media and technology with work like Ben Bray’s periodic streaming video updates from his current expedition in the Arctic, John Craig Freeman and his collaborator’s augmented reality installations famed for using their politically-minded virtual exhibitions, Anne Torke’s residual accumulation sculptures from the home, and much more.