COLLISION16:fluid
Fri, 02/25/2011 – Sat, 03/26/2011
AXIOM Center for New and Experimental Media
Our world is fluid. Seven tenths of the Earth’s surface is water; a similar ratio holds for the body’s proportion of liquid to solid. Interesting things happen in fluid, and life seeks it out. Discrete elements dissolve and commingle. Change is swift and subtle forces hold sway, opening possibilities. Our culture and our creations exist solely in the fluid realm, exceeding the limits of material liquid and leaving us grasping the paradigm of change as the only solid.

COLLISION16:fluid, the sixteenth COLLISIONcollective group show of new work, explores the concept of the fluid and the changing, in a wide variety of manifestations and interpretations. These works range from a piece in which pixels on screen are programed to act like a liquid, to works that explores the fluid boundaries of our perception, from work that aesthetisizes the “glitch” —an unanticipated or undesired change in the media stream, to a work that uses images projected on ice to explore our changing climate. What these works have in common is that they they express the contingent and the unforeseeable. As technology’s rate of change continues to get faster and faster, it has dramatic consequences for our culture. In order to reflect our would, our art must be able to embody the fluid. The work in COLLISION16:fluid does exactly that. 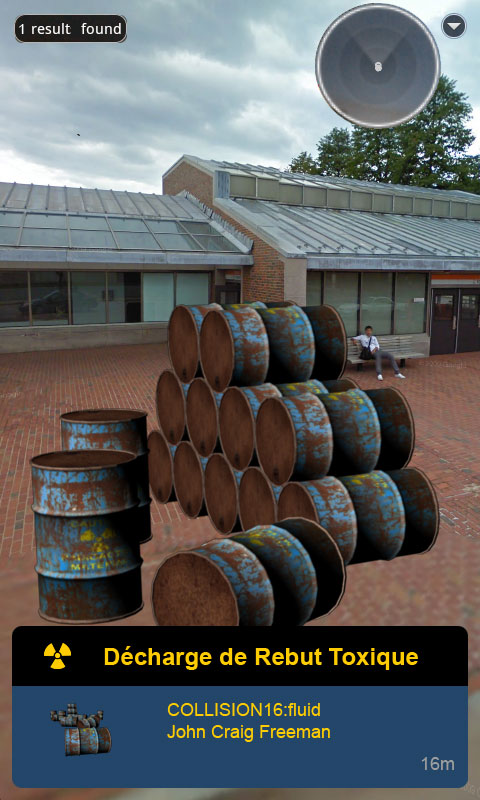 Décharge de Rebut Toxique is an augmented reality public art project built for smart phone mobile devices. The public can simply download and launch the Layar Augmented Reality Browser app on their iPhone or Android and aim the devices’ camera at the area around Green Street Station and all other outbound south Orange Line stations. The application uses geolocation software to superimpose computer generated three-dimensional art objects, enabling the public to see the work integrated into the physical location as if it existed in the real world.

With locations in New York, Boston and Paris, Décharge de Rebut Toxique consists of sprawling radiotoxic waste dumps at a time when the world is reconsidering its policies on nuclear energy after the 2011 Fukushima Daiichi nuclear disaster.

John Craig Freeman is a public artist with over twenty years of experience using emergent technologies to produce large-scale public work at sites where the forces of globalization are impacting the lives of individuals in local communities. His work seeks to expand the notion of public by exploring how digital networked technology is transforming our sense of place. Freeman is a founding member of the international artists collective Manifest.AR and he has produced work and exhibited around the world including at the Los Angeles County Museum of Art, the San Francisco Museum of Modern Art, FACT Liverpool, Kunsthallen Nikolaj Copenhagen, Triennale di Milano, the Institute of Contemporary Art Boston, and the Museum of Contemporary Art Beijing, He has had work commissioned by the ZERO1, Rhizome.org and Turbulence.org. His work has been reviewed in The New York Times, El Pais, Liberation, Wired News, Artforum, Ten-8, Z Magazine, Afterimage, Photo Metro, New Art Examiner, Time, Harper's and Der Spiegel. Christiane Paul cites Freeman's work in her book Digital Art, as does Lucy Lippard in the Lure of the Local, and Margot Lovejoy in Digital Currents: Art in the Electronic Age. His writing has been published in Rhizomes, Leonardo, the Journal of Visual Culture, and Exposure. Freeman received a Bachelor of Art degree from the University of California, San Diego in 1986 and a Master of Fine Arts degree from the University of Colorado, Boulder in 1990. He is currently a Professor of New Media at Emerson College in Boston. Freeman writes, “If Andy Warhol set out to create a distinctly American art form in the twentieth century, I identify with those who seek to create a distinctly global art form in the twenty-first.”
View all posts by John Craig Freeman →
This entry was posted in DéchARge de Rebut Toxique, Exhibitions. Bookmark the permalink.